In recent months, I’ve been seeing a lot of dogs come into the shelter with extreme anxiety and symptoms of neophobia.  These dogs have been fearful of new people, new places and new experiences to the point that they will not willingly leave their runs to go for walks with volunteers.  The dogs have each been completely shut down and either actively or passively avoiding contact with every human that cares for them or walks by.  I’ve had cases of dogs that were extremely reluctant to leave their kennels, avoiding contact with new people, or refusing to go for any distance on walks and constantly trying to return to their “safe space” inside the shelter.

There is no consistent background for these dogs.  Some of these dogs were surrendered and some were transported from other shelters, and their histories are often incomplete.  That said, I must wonder whether this is related to the pandemic:  they had limited experiences, socialization and contact with people because their owners were pretty much housebound.  In any case, they’re here now and we have to help them get past their stress and anxiety.  And it is incumbent on us to do accomplish in a way that reduces their overall stress and increases their interactions with potential adopters.

There are a couple of techniques that I’ve developed that help dogs overcome these behavioral issues.  The basic thought behind them is to give the dogs time to work through their anxieties and become accustomed to their surroundings and to strange humans.  Give them a chance to solve their own problems without forcing them to perform any specific tasks.

First off:  When a dog is nervous about meeting new people, don’t force the issue or insist on leashing/harnessing him up in your first meeting.  When I am working with a dog for the first time, I don’t enter his run right away.  Instead, I spend a little time outside his run, turned sideways to him and not engaging.  Having some reading material helps.  When I enter the run, I stay turned sideways to him and kneel to reduce my apparent size.  If he doesn’t approach, I don’t force the issue; I just scatter some treats and ignore him for five or ten minutes, then leave.  I then wait an hour or so before returning and then repeat the process I outlined above.  Eventually, he’ll become more confident and start approaching for pets and more treats.  When he accepts contact, pet him briefly on his chest and the side of his neck and then pause with your hand nearby to see if he initiates more contact (consent signal).  Let him get as close as he wants. 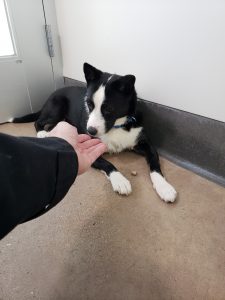 The dogs in the above pictures (Jack and Yoda) are showing signs of being anxious upon our first meeting.   Note that they retreated to the rear of their respective kennels, and laid down with stiff postures, ready to run away from me.  Please also note the tightness of their mouths and around their eyes.  In both cases I scattered high value treats in the space between them and me, and did not attempt to force contact.  The picture on the above right was taken on a second visit with Jack, when he was a little more comfortable with my presence and was taking treats from my hand and accepted petting.  After I paused petting, he nosed my hand, seeking more contact.

When he is comfortable with you petting him with both hands at the same time, you can try putting on a leash and harness.  Take it slowly, as this involves a lot of contact and handling.  You may find that, at first, simply putting the harness over his head without fastening is all that he can tolerate.  Watch his eyes and facial expression to gauge his level of stress and discomfort (ref); stop and remove the harness when you think he’s had enough.   Eventually, he’ll allow you to snap the harness in place.   Note:  For dogs with a high degree of anxiety, I always clip the leash to the front ring of the harness as well as to the Martingale collar.  The harness and collar are only as strong as their plastic clips, which can break, and you don’t want to risk him panicking and bolting.  By using the leash and harness, you can retain control of the dog even if one of them breaks.

You might find that the anxious dog is unwilling to leave his run after being leashed.  In my experience this is pretty common:  The corridor is full of unfamiliar smells, noises, other dogs, strange people, etc., and once the dog learns that his kennel is a safe space, he may be very reluctant to leave it.  I never force the dog to leave the run.  Instead, I prop the door open and sit just inside it, facing in any direction except towards the dog.  I scatter some treats around and outside the door and wait for him to muster enough courage to leave the run in order to reach the furthest treats.  Be patient, this can take multiple attempts.  They key is to not put any pressure on the dog and let him decide when he’s ready.

Once you’re outside with the dog, you might find that he is very fearful and wants to go back inside.  When this happens do not force him to go in any particular direction but don’t go back 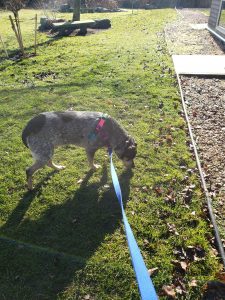 inside right away.  Just sit with him for a while and relax.  After a few minutes he’ll start to notice new sounds and smells and will probably start sniffing around and taking in his surroundings.  This provides some enrichment and helps him to get familiar with the area outside.  Keep an eye on his posture and expression and watch to see if he begins to relax.  When he begins to investigate his surroundings, look at his eyes, ears, posture and tail position to see how he enjoys it.  When he starts to relax, move a little further away from the entrance door and give him the option of joining you.  In my experience, he will eventually want to relieve himself and leave scent marks, which will allow you to take him further away from the building.  By degrees, you can increase his distance and time outdoors.  Again, let him get comfortable with being outdoors before moving further along.  In an earlier post, I gave a pretty good example of desensitizing a dog that was fearful of being outdoors (Penny, a story of counterconditioning | The Animal Nerd).  In the picture to the right, you’ll see Yoda is anxious and stressed by being outdoors, but is slowly becoming engaged in his surroundings.

If he’s willing to walk with you for some distance away from the building, you might find that he suddenly stops and refuses to move in any direction except back the way you came.  If you think that you can go further without causing him serious distress, there is an easy way to get him to continue the walk.  Holding the leash In your right hand, approach his right side while taking up the slack in the leash with your left hand (just shorten the leash without pulling it tight).  When your left leg is alongside his right shoulder, make a turn to your left across the front of his body, so that you are guiding him in a tight turn.  Once he’s started turning, walk in any direction that you choose.  You may have to repeat this a few times.   Never try to force him to go in any direction, just make it easy for him to accompany you.

The point of all this is to help the dog to become habituated to new people and new surroundings without increasing his stress and anxiety.  You want to make meeting people and going on walks as routine as possible for him.   Once he’s relaxed in your company and you have established a trust relationship with him, you can introduce positive training and some playing.