From Rhode Island Division of Fish and Wildlife – via Facebook 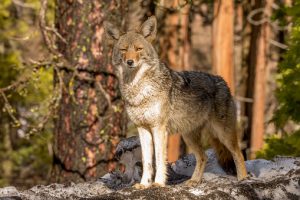 Its coyote season again.  This is the time of year when coyotes mate and establish dens and territories in preparation of new puppies arriving in the spring.  We can expect new encounters and sightings in our neighborhoods in the coming months.  So, I thought this might be a good time to discuss some commonly held notions and beliefs about them.

Myth Number One:  Coyotes roam in packs. Everyone knows that.

Actually, they live in small groups of about 5 individuals, consisting of a dominant male and female pair, with a few lower status members and any puppies that have been born that year.  In some cases, the “pack” may consist only of the breeding pair and any pups they may have.  The size of the pack is limited by the availability of game and the level of danger in that environment – in areas in which they are hunted or more likely to be killed by automobiles, their “pack” size tends to be smaller.

A third to a half of the coyotes that you may encounter don’t belong to packs at all, and are solitary animals.  They may be individuals who have left their packs and are looking for mates, or a looking for a pack to join, or just like being alone.1

The misconception that they live in larger groups may be due to their vocalizations.  When they get together for a good howl, two or three of them can sound like ten, as seen in the below video:

Not so much.  Coy-wolves are not a thing.

Before Americans started moving west, coyotes were rare east of the Mississippi River.  Starting over 100 years ago, coyotes from the American west began moving into Ontario, CA, taking over the space left by other predators being forced or hunted out.  As they drifted eastward, they intermingled with hybrid wolf populations in Canada, and became genetically distinct from the western coyote populations.  These hybrid coyotes are generally referred to as Eastern Coyotes.

A genetic study of coyotes in the New York area found that they generally 64% coyote, 13% gray wolf, 13% eastern wolf and 10% dog.  This should not be interpreted as meaning that they are interbreeding with domestic dogs.  That DNA was picked from the hybridized wolves they interbred with on their way east.  There is some speculation that species that are endangered or under pressures to survive, such as wolves, are more likely to breed with other, more successful species.  2

As a result of this genetic mixing, the coyotes we see in the US northeast are somewhat larger than their western counterparts and have slightly larger heads.  The ones that you are likely to see in your neighborhood will be between 20 and 40 lbs, about the same as a small- to mid-sized dog.  But they’re not coy-wolves.

Myth Number Three:  Coyotes attack people. Everyone has a story.

No.  They don’t.  They really want nothing to do with us.  You and your kids are safe from them.

Coyote attacks are, in fact, very rate.  There is only one recorded incident of a human being killed by coyotes in the United States.  Most cases in which humans have been bitten by coyotes are instances in which the coyotes were being fed (its never a good idea to feed wildlife) or in which people were attempting to save their pets from a hunting coyote.3

There are stories of people who claim that they were “stalked” by a coyote while out walking or hiking.  It is more likely that the coyote was simply curious, or had been fed by someone, or has simply become habituated (accustomed) to humans and is less fearful than it should be.

Myth Number Four:  Coyotes are rabid. One bite and you die.

Not really.  There is a coyote strain of rabies, but that is limited to a population in Texas.  They are considered to be a disease vector for rabies, but no more so than any other wild predator.  The primary risk of a rabid coyote is one that was bitten by an infected animal of another species.6,8

Not a Myth:  Coyotes can prey on pets and livestock

Yes, this can happen.  Coyotes are opportunistic predators and will attempt to make a meal out of any small prey they encounter.  This can include your pets, including smaller dogs or cats, or any other pet animals that you may leave out in your yard.

Dogs can be particularly vulnerable.  We encourage them to be social with their fellows and they may approach coyotes that they encounter.  Particularly so at this time of year then coyotes are mating – a fertile female coyote can be very interesting to a male dog. 4,8

That said, they don’t make a practice of eating our pets.  Nor, contrary to popular belief, do they live largely on our garbage.  Studies of eastern coyote scat from urban and suburban areas show that they live primarily on rodents, fruit (Yes, they have a sweet tooth and like berries or apples and pears) and deer (whether they hunt deer, or are scavenging road-killed deer carcasses is unclear).  2,5,7

The easiest way to protect your pets from coyotes to not let them roam, and don’t let your rabbits and chickens freely wander around your yard.  Keep them in protected runs.  And take particular care to have them secure at night.  Eastern coyotes hunting habits are shifting in response to human behavior and they are becoming more and more nocturnal –  when we are less active. 3,4

Lastly, we also share our suburbs with other predators, including feral cats and dogs, raccoons, foxes, weasels, minks, owls, etc.  Although coyotes are becoming more and more common in our neighborhoods, its likely that they are being blamed for predation done by other species.

The reality is that they are present in your neighborhood.  They are getting used to the flood of noises, smells and activity that we create, and are thriving in our urban and suburban ecosystems.  They are somewhat beneficial as they prey on rodents such as rats, mice and moles that can become nuisances if left unchecked.  They’re not going away and we need to cohabitate with them, just like we do with foxes, raccoons, opossums, weasels, raptors and other local predators.

So what to do?  First off, do not – not – ever feed them.  That is that unkindest thing you can do to them.  Having them become unafraid of humans and seeing us as a food source is dangerous for both them and us.

If you encounter one or more?  Scare them.  Make yourself look as big as possible and make a lot of noise.  The more they fear humans and avoid us, the better for all concerned. 9

3 Coyotes and people: What to know if you see or encounter a coyote | The Humane Society of the United States

4 Coyotes are everywhere and breeding season is here, so watch your pets (newbernsj.com)

8  How to Protect Your Pet from Coyotes | PetMD

9 What To Do If You See A Coyote – CoyoteSmart (coyotesmarts.org)