When you examine the various advertisements for dog trainers or behaviorists, you will find a number of them describe the approach they use in training as “balanced”, or will indicate that they follow the “Koehler Method” or some other methodology such as the use of “e-collars”.  You should take the time to research what is meant by that terminology.   In general, these training approaches incorporate the use of “aversives” or punishment as part of the dog’s training.

What is an “aversive”?  Why are they used?

Essentially, an aversive is something that the training does to the dog when that dog does something undesirable.  They can take the form of an electric shock, an unpleasant spray to the face, throwing an object at the dog, making a sudden startling sound, jerking the dog’s collar, jerking on a prong collar or choke chain, or physically punishing the dog by hanging or choking.  In short, an aversive is an action on the trainer’s part to make the dog afraid of not obeying, or afraid to do something other than what the trainer wants.  The use of punishment in dog training is closely associated with the dominance or “pack” theory, in which trainers physically correct dogs with unpleasant outcomes for their actions.  This theory of behavior will be addressed in more detail in a later article.

A “balanced trainer” typically follows the training philosophy that punishments should be part of the trainers’ toolkits, along with incentives.  This is a carrot and stick approach.  Some of them claim that it is a science-based approach and point to the four quadrants of operant conditioning as justification for this thinking. Proponents of the Koehler method will state that dogs are being given freedom of choice about their actions and are learning to not make certain choices because of the pain or discomfort that they receive afterwards.

William Koehler (1914 – 1993) was a well-known, celebrity dog trainer and his book The Koehler Method of Dog Training was for many years considered to be the bible for dog trainers.  Like many trainers of the last century, he used extreme methods of punishing dogs for disobedience or for perceived “defiance”.  These methods included hanging a dog by a choke lead until he ceases moving and is unconscious, as well as the use of a weighted hose to discipline a rebellious dog by beating him.  In Koehler’s view, allowing a dog to be untrained or disobedient was more inhumane than using harsh methods to instill obedience in the dog (Koehler, 1962).    Koehler’s methods are still practiced by a number of trainers today, notably some of the trainers involved in the training of police or military K-9s.

In addition to the beating described above, trainers who incorporate aversives in their programs may use a wide range of tools, including but not limited to prong collars, shock collars, choke chains, thrown objects, loud noise makers and unpleasant sprays.  They can also use personal corrections, such as swinging the 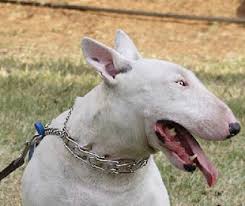 dog on its leash, hanging the dog by its collar, choking the dog, striking them, yelling at them, or a number of other physical punishments.

The use of aversive measures in dog training is based on the belief that the dog is intentionally and willfully being disobedient and that he needs to learn that this deliberate behavior leads to punishment.  Alternatively, these methods are used to form such unpleasant associations with certain behaviors so as to make the dog avoid performing them.  This second aspect is why these methods are sometimes called “scientific” by the trainers using them, as they involve some form of reflexive or Pavlovian behavior modification.

So what’s the problem?

The simple fact is that the use of physical punishment, intimidation and aversive measures in dog training isn’t necessary, or any more effective than positive training methods (Ziv, 2017).  In fact, the use of harsh corrections in training has been found to be counterproductive and actually increases behavior problems.  Studies have shown that punishment-based training not only increases a dog’s fear of his owners, it affects the dog’s social behaviors and overall trust of humans; the dogs actually become more resistant to training (Rooney & Cowan, 2011).     The use of aversives in dog training has been shown to be no more effective than positive training, and will actually increase serious behavioral problems (Hiby, Rooney and Bradshaw, 2004; Blackwell, Twells, Seawright & and Casey, 2008).  As mentioned above, dogs trained in an environment that incorporates aversives will actually be more stressed in training and resist taking part in it, due to their anticipation of physical pain and discomfort.  Their stress levels and anxiety during training are notably higher than dogs’ who are trained with positive methods.  In fact, dogs trained with punishments tend to avoid their owners and be less attentive to them than dogs trained with positive reinforcements (Deidalle and Gaunet, 2014).  These methods kill the dogs’ motivation to learn.

Studies have shown that the use of aversives and punishment in training are closely associated with increases in aggression and biting, due to the stress and strain associated with those training methods (Herron, Shofer and Reisner, 2009).  Such training methods actually endanger both the physical and mental heath of the dogs involved (Ziv, 2017).  The use of aversives actually causes dogs to be fearful and can create unintended negative associations for them – damaging their relationship with their owners and humans in general (Todd, 2018).

For these reasons, animal welfare organizations such as the RSPCA, the ASPCA, the HSUS, the AAHA and the AVMA have issued statements supporting positive training methods and condemning the use of aversives in pet training.  According to the AVMA “Aversive training has been associated with detrimental effects on the human–animal bond, problem-solving ability, and the physical and behavioral health of the patient. It causes problem behaviors in normal animals and hastens progression of behavioral disorders in distressed animals.” (AVMA, 2015).  The Association of Pet Dog Trainers, the International Association of Animal Behaviorists and the Certification Council for Professional Dog Trainers have all established the Least Intrusive Minimally Aversive  (LIMA) protocol, which emphasizes the use of positive training methods with an absolute minimum of any aversive measures.

The bottom line is that we have learned a lot about animal behavior and learning in the 60 years since Koehler published his training method, and have found that punishment and aversives are not only cruel, they are harmful to animals’ welfare, and result in behavior problems and fear-based aggression.  Further, they don’t get any better results that positive methods.  In spite of this, although many trainers and owners are resistant to positive-only training, citing their own expertise and questionable authorities.

In previous posts, I’ve mentioned the Least Intrusive, Minimally Aversive (LIMA) approach to training and behavior.  So, what is it?  The latest training fad?  Hardly.

LIMA is an approach that has been adopted by the Association of Pet Dog Trainers (APDT) and the International Association of Animal Behavior Consultants (IAABC) as a humane and ethical practice of dog training and behavior modification.1  Although this approach was developed for canines, it can be applied to all living creatures.  LIMA incorporates a systematic hierarchy of procedures that should be followed in all cases.

Hierarchy of Procedures for Humane and Effective Practice 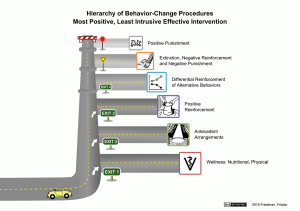 As seen above, a humane and ethical trainer/behaviorist will first determine if a behavior is caused by a medical or physiological issue.  Often, they will have their clients consult a veterinarian to determine whether such an issue if contributing to the behavior.  Once this first step is eliminated, they will then attempt to simply remove or modify any conditions or stimuli that are causing the behavior:

Example:  Fluffy stands at the window and barks at passers-by, even though they are a reasonable distance from the house.  Assuming that no medical conditions are involved, a behaviorist may recommend installing shutters or blinds that can cut off her view of the street during times that barking is an issue – like when the baby is taking a nap.

Only when these two first steps have been considered will the behaviorist try behavior modification techniques, emphasizing the positive reinforcement of desired behaviors.  In all cases, a trainer should ask “What do you want the animal to do?”

By emphasizing reinforcement of desired behaviors, and minimizing any aversive measures, a trainer or behaviorist can humanely teach an animal alternative reaction to a stimulus.  Using the above example, the trainer may prompt Fluffy to sit quietly when people walk past the house, or may help Fluffy’s owners desensitize her so that she only reacts when strangers come closer to the house.  However, a trainer who ascribes to the LIMA approach will only use aversive measures, such as a bark collar, only when all other options have been ruled out.  IAABC and ADPT sites for detailed position statements on the use of punishment during training and the use of “training aids” such as shock collars.