In a dog’s world, fireworks and thunderstorms are very similar.  Both involve sudden flashes of light, loud and low-level noises, new scents (ozone from a thunderstorm and gunpowder from fireworks).  Dogs can become very fearful of these experiences, sometimes to the point of developing extreme fear responses or phobias.  Much of this varies according to the dog’s experiences with sudden noises, its early exposure to these stimuli and the dog’s general personality (Blackwell, Bradshaw & Casey, 2013).  In these cases, many owners have attempted to relieve their dogs’ fear by means of a pressure wrap, sometimes marketed under Thundershirt®. 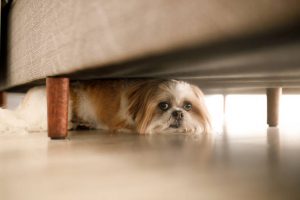 Dogs have a variety of fear-related reactions to thunder or fireworks, including hiding.

Anxiety wraps have been used to treat behavioral issues in autism patients and to aid in reducing fear and stress.  Deep pressure, such as firm hugs and muscle massage has been shown to release endorphins that can relieve pain and provide a sense of well-being in the short term (McKenzie, 2011).  However, the question remains whether a light sense of pressure, such as provided by an anxiety-wrap, can provide the deep endorphin-releasing stimulus that a massage provides; and, if so, whether wearing a wrap for the duration of a fireworks display or thunderstorm is effective.

So, do they work?  Possibly.  But there’s very little evidence to support the claims made by manufacturers and marketers of these products.

First off, much of the evidence presented to support the claims of effectiveness are in the form of testimonials or product endorsements.  This sort of claim should always be taken with a pinch of salt, as they are often simply invented by sales staffs.
The majority of the other claims of effectiveness are anecdotal reports by laypersons, based on their observations of their own pets.  This sort of reporting is generally unreliable, simply because of the strong possibility of unintentional confirmation bias on the part of the dog owner.  That, and the possibility of a sort of placebo effect on the owners’ part, in which they see improvement that may not actually be present.

With regard to clinical evidence, there is very little.  The one quality study that I could find shows that pressure wraps do nothing to affect the physical symptoms of fear and anxiety (measured heart rate) but did result in some changes in the dogs’ anxiety-related behaviors.  Which indicates that the dogs’ fear wasn’t reduced, but their behavior in expressing that fear was affected (King, Buffington, Smith & Grandin, 2014).   This begs the question as to whether the pressure wrap is actually helping the dog.  The dog may appear calmer, but is simply staying still because he feels inhibited in his movements (Buzhardt, nd).   A review of related studies published in 2018 indicated that most studies were based on owners’ subjective assessments of their dogs’ emotional states and concluded that the vests may have small positive effects but that owners should have no expectation or any benefits from using them (Buckley, 2018).

As a behavior consultant, I am skeptical of the anecdotal claims made regarding these products.  As stated above, a fair number of them are dubious in nature (this is the internet, after all) and may simply be cases of “astroturfing”.  And, as discussed above, claims made by individual dog owners can’t be considered reliable, no matter how well-intentioned.  They are not disinterested parties and are not making controlled studies.   Also, the vast majority of owners do not have the training to accurately diagnose dogs’ behaviors, and do not have the facilities to measure heartrate, blood pressure and cortisol levels associated with severe anxiety.
I am also somewhat concerned about the use of these products without the involvement of behavior professionals:   Incorrectly used, a dog may come to associate the vest with unpleasant stimuli that it is intended to alleviate, making the fear response worse.  Also, if worn for extended periods, the dog may become habituated to the vest, making it ineffective.   And, if a dog is overwhelmed by the noise, sight and smells going on around him, adding the stimulus of touch may be the worst thing that an owner can do.

Mainly, I am reluctant to recommend these products simply because they do nothing to reduce the dog’s fears.  They do not address the underlying causes of the extreme anxiety and stress that the dog is experiencing.

The way to alleviate dogs’ (and peoples’) fear of objects or situations is to change their emotional state through desensitization and counterconditioning.   These involve treating the dog’s sensitivity to the event that is causing the fear reaction, by gradually increasing the dog’s tolerance to it and/or by introducing a positive experience that the dog can come to associate with the anxiety-causing event (Todd, 2018).  The goal is to help the dog by reducing the amount of fear and anxiety that he experiences in response to certain stimuli, in this case thunder or fireworks.  The goal of a behaviorist is to help a patient be less afraid, instead of outwardly seeming less fearful.
In some cases, veterinary assistance may be needed.  At the risk of introducing an anecdote, I have been involved in a case in which a dog was left alone in a house during a particularly violent thunderstorm and developed an extreme fear to them.  This was treated by a veterinary behaviorist, who prescribed a low dose of valium to be taken when thunderstorms were imminent.  After a few treatments, the dog “learned” that she was not fearful during the thunderstorms and her reactions to the storms were greatly lessened.

As stated by King et al, “This pressure wrap can be used adjunctively in a treatment program for dogs with these specific anxiety diagnoses, but should not replace current treatment options (behavior modification and medication) for canine Separation Anxiety and Generalized Anxiety Disorder. Caution must be practiced if using the ThunderShirt for dogs with phobic reactions to loud noises or thunderstorms, as this had not been studied with the canine anxiety diagnoses.”

I suggest that they may be used as part of a treatment program that employs science-based behavior assessment and modification techniques to reduce the fear that dogs associate with thunderstorms or fireworks; but should not be relied upon by pet owners as a stand-alone treatment that is administered at home.