Many of the dogs that I encounter at the shelter are overly stressed and somewhat frightened.  And they sometimes come to us with, and because of, behavioral issues that their owners were unable to manage or live with.  Reactivity is one of the more serious of these issues that we encounter.

“Reactive” is a poorly defined term that is commonly used in describing dog behavior.  I tend to use Dr. Karen Overall’s definition of a reactive animal as one who responds to a normal stimulus with a higher-than-normal level of intensity.  This can be based in a strong emotional response to that stimulus, such as fear, over-excitement, or simple frustration.  Putting it another way, reactive behavior is a severe, undesirable response to anything that causes the dog to feel fear, anxiety or an abundance of stress.  If the intensity of the response reaches the level that the dog is unable to control his actions, this becomes a problem for most owners.

Reactivity is very common among the dogs that you will encounter in shelters.  Shelter dogs are under a great deal of stress under the best of circumstances and may be prone to having exaggerated reactions to the presence of certain stimuli – most often other dogs.  Their level of stress may be such that the sight of another dog, or any other stimulus that triggers a strong emotional response, is all it takes to put them over a behavioral threshold into a state in which they become aggressive.  This may be due to a number of reasons: 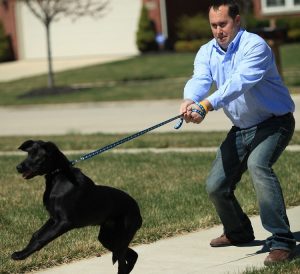 This dog is reacting to the barrier frustration of being restrained by a leash.

Note that I have not used the word “aggression”.  Reactivity and aggression are two entirely different things.  A reactive dog is over-reacting to a particular situation – he may simply overly eager to meet and greet another other dog or a person.  However, the amount of frustration that he experiences during this excited state can reach the point at which he behaves aggressively, or even redirects his over excitement and potential aggression to the person that is handling him. (Rakosky, 2020).

Please also note that, although the presence of other dogs is a very common reason, a dog can be reactive to almost anything that causes an emotional response.  Men wearing hats, children, cars, or anything else that induces fear or excitement can cause a dog to become over-excited and react.  The reaction can be based in fear, over-eagerness, or any other strong emotion.  And this behavior can become reinforced over time:  If your dog sees a person or another dog outside your window his territorial instincts may go into overdrive, causing him to go ballistic.  When the trespasser eventually goes on his way, your dog will interpret that as the result of his over-the-top performance and will reinforce and encourage that behavior (Miller, 2003).

Which brings us to a dog that I’ve been working with at the shelter.  She is a one-year old Akita, very pretty and well-socialized with people, who was presented with a history of strong reactivity to other dogs.  In reviewing her history, I found that she had initially been transported in from another state with very little background or information, and then was adopted out to a local home after a relatively short stay in the shelter (this is not surprising, pure-bred dogs do not tend to have lengthy stays in shelters).  Her adopters lived in a townhouse with a small, fenced back yard, and she had been “aggressive” with the neighbor’s dog through that fence.

I began working with her by taking her on walks around the shelter grounds, avoiding interactions and keeping to quiet areas with trees and benches.  She was extremely anxious the first couple of times I had her outside her run:  She was on high alert and was vocalizing with whines and whimpers, with her Akita tail held down and refusing treats.  That said, she never displayed any anxiety about being handled or being fitted with a harness.  It took three outings on consecutive days before she relaxed and began to enjoy being outdoors with me.  She eventually relaxed, interacted with her environment and me in normal, curious manner and carried her tail in the distinctive Akita curl.  Once I had gotten her accustomed to the shelter grounds and a low level of activity, I worked on determining the level of her reactivity.

Given that she was a large and powerful dog, for safety’s sake I tested her reactivity by having her harnessed and on leash while an assistant leash walked a life-like dummy dog near her and we both watched her closely while this stimulus was present.  She became agitated when the target (dummy) dog was being walked (pacing and whining), but she could be easily distracted from it and never lost her leash manners or responses to my instructions.  However, when I had my assistant position the dummy so that it was facing her – apparently standing still and “staring” at her – her response intensified, and she began aggressively barking and lunging.    However, she never became so aroused that she ignored her handler or redirected her “aggression” to any persons or objects.  Throughout this exercise she was relatively easy to distract and move away from the dummy.

I reported to shelter management that I thought her reactivity was at a low level and was manageable.  From what I observed, she was uncomfortable with other dogs and tried to avoid interacting with them.  When confronted with the dummy, she had engaged in distance-increasing behaviors and tried to move away from it; and it was only when we increased the level of engagement with the dummy that she increased her distancing behaviors and put on a threatening display (Farricelli, 2021).  I informed the shelter staff that, although I hadn’t observed her in her adoptive home, I considered it possible that her yard had been too small to give her a chance to escape the neighbor’s dog even though they had been separated by a fence.  I also offered the possibility that she engages in trigger stacking and that the intensity of her reaction to the dummy had been increased by the “background” stress of being in a shelter.

This illustrates the need to closely define the exact stimulus that triggers the over-the-top emotional response in a reactive dog.  It could be a person walking by the house, or just a person walking another dog.  It could be anyone who comes to the door, or just a deliveryman in a uniform.  It could be the presence of one dog, a particular behavior by that dog, or a group of dogs playing.   Before diving into a treatment, you must first diagnose the specific stimulus that is sending the dog over his behavioral threshold.  It’s not enough to say that he’s reacting to other dogs, you must fine-tune that statement as much as possible.  For example, does he react to the sight of all other dogs everywhere he encounters them, or is it only under certain circumstances?  Is it all other dogs, or just dogs of certain sizes?  What are the dogs doing that sends him over the threshold of his self-control?  Are they excited, playing, roughhousing? running?

And it illustrates the need to closely observe the dog in situations where the reactivity occurs.   Ideally, you will observe the dog with its owners in the home environment in which the behavior occurs.   You must identify how the dog behaves from the moment that he first encounters the stimulus that causes his reactive behavior.  Does he try to distance himself from it?  How is he communicating his anxiety?  And at what point does he reach a behavioral threshold?

Its only after going through this process that you can determine how to manage or treat the dog’s reactivity.  There is no one-size-fits-all solution, and it requires the owners to either commit to avoiding or managing situations in which the reactivity can be triggered, or take part in course of systematic desensitization.

I’m happy to report that my akita friend was adopted last week.  The shelter staff took care to place her with experienced adopters who had more space and were committed to engaging a behaviorist/trainer to help socialize and desensitize her.