The first step in training a good loose-leash walk:   Getting Out the Door.

You want to have a nice, relaxing walk with your dog.  You want to enjoy the fresh air, chat with people a little, and have some easy and quiet time with your buddy.  And then you find yourself being dragged along by an Iditarod wanna-be, who’s completely obsessed with getting to the next thing he wants to sniff and treats you like a sled.  This is not what you signed up for.  How did this happen and how do you change it? 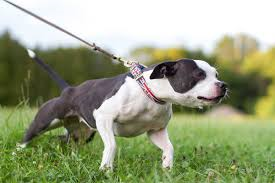 This isn’t relaxing or pleasant for either you or your dog.

The first thing you have to realize is that going for a walk is a big deal for your dog.  It’s the best part of his day.  He gets to sniff new things, works of pent-up energy and he’s spending time with his favorite person.  He’s excited to get out there and get started.   If he is already over-excited about going outside for a walk, and is jumping or doing doughnuts in the house because he’s so eager to go, then its pretty unreasonable to expect him to immediately settle down and be perfectly polite once you go out the door.  You want him to be in a pretty mellow state of mind when you’re headed out the door, and that begins when you decide that its time for the walk.  So, the first thing to do is to extinguish any over-arousal or inappropriate excitement when you’re getting ready to do.

If he already has an established behavior of over-excitement before the walk even starts, addressing that is the first step in teaching him leash manners.  Before starting this, ask yourself if you are contributing to this excitement.  Face it, how excited for the walk are you?  You probably enjoy it but, as far as you’re concerned, its not a big deal.  That’s the message you want to convey to your pet before you leave.  Don’t make a big deal out of getting ready to go outside.  Don’t ramp him up by asking “Wanna go for a WALK??!!”

If he already has an established behavior of over-excitement before the walk even starts, addressing that is the first step in teaching him leash manners.

Do you have established times of day for going on walks?  Is this part of a set routine?  If so, is he watching you like a hawk as the minutes count down to that time, while his excitement slowly ramps up?  Does he spring into action when you get up and reach for the leash?   If so, then the simplest way to address this is to randomize your walk times.  Go on short walks at varying times through the day, so that he is not ramping up his excitement in anticipation.  There’s no need to stop going for walks at your regular time, just add some random outdoor time to the mix.

Have you, even inadvertently, established a ritual that signals to him that a walk is about to begin and triggers excitement on his part?  Does he start over-reacting every time you pick up the leash?  If so, there are a couple of things you can do:

First off, change whatever you are doing that prompts his excited behavior. (Keeping in mind, you don’t want to decrease his enjoyment of walking.  You just want to change his behavior that expressed that enjoyment.)  If you have a particular sequence of actions (get up, sigh, stretch, say something to your spouse or partner about going for the walk, put on a hat, pick up the leash) that your dog has come to recognize, then modify that ritual.  Mix it up a little.  Don’t send the signals that ramp up his excitement (King, 2019).

Secondly, don’t reward his excitement.  If he is spinning himself into an excited state every time you pick up the leash, then stop reinforcing that behavior.  If you pick up the leash and he responds by excited jumping, mouthing, or any other undesirable behavior; stop, put down the leash and turn your back until he stops.  Don’t give him any feedback at all.  Repeat this every time he has the behavior that you want him to stop.  Be consistent.  Remember, the leash and the walk are the reward he’s been getting for acting like this.  You want to eliminate that reward and stop the reinforcement (Miller, 2008).  It may take a while for it to sink into his head, but if you stick to it, he will learn that the excited behavior gets him the opposite of what he wants.

Note:  In some cases, this lack of reinforcement may result in him increasing this behavior for a short period and seem to be even more excited.  If this should happen, remove yourself from the vicinity and give him a time out.  If it persists, consult a professional canine behaviorist.

Third, its not enough to make your dog stop doing something.  You want to give him something else to do instead of the behavior you want to extinguish and reinforce the alternative behavior. Have him do something that makes it impossible to act excitedly while being leashed up.  You’ll find this referred to as “Differential Reinforcement of Incompatible Behavior” (Chance, 2006).   Presumably, he already has a repertoire of tricks that he’s already been taught; if he knows “sit”, have him do that while you’re leashing him up.  If he doesn’t hold the sit throughout the whole leashing-up exercise, give him a quick “Nope” or “Uh uh” then stop, reset and start over.  Being released from the sit with the leash attached and praise is all he’ll need.  The leash being attached, and the walk starting, is the reward for a “good sit”.

Reducing the dogs’ initial excitement level is the first step in reducing over-excitement and pulling during walks.  In the next post, we’ll look at reducing the pulling behavior while the walk is ongoing.

King, T. (May 2009).  Over Excitement in Dogs.  The Bark.  Retrieved from thebark.com/content/over-excitement-dogs