I’ve recently worked with two shelter dogs who were in danger of being deemed “unadoptable” due to their excessive mouthiness with humans.  Both dogs were medium sized mixed breeds who had developed tendencies to grab arms, hands and clothing when being handled – to the extent that some shelter personnel were unwilling to deal with them.  It became my job to identify the reasons for this behavior and find a way to reduce its intensity and severity.

The first of these dogs, “Aggie”, was the more severe case.  She was a very pretty, goofy and friendly pit mix who was almost impossible to handle due to her biting and grabbing behavior.  She would be walking on leash and suddenly turn on the handler and begin intently biting his shoes, cuffs or socks.  When being harnessed, she would grab and hold the handlers’ hands or forearms.  Her behavior was escalating and becoming a serious problem and impediment to adoption.  So she became one of my “project” dogs.

Excited/arousal biting is an impulse that some dogs have to use their mouths inappropriately when they are in a high state of excitement.  Their need to use their mouths to hold and chew something becomes greater than their bite inhibition, and they tend to grab something that in inappropriate or harmful to others.  Arousal can be defined as “The state of being that occurs when strong emotions are evoked by fear, anger, stress, excitement or joy…During heightened arousal, animals are predominantly reactive, the limbic system in the brain manages their flight or fight reactivity.  During peek arousal, the animal may be unresponsive to attempts to elicit trained behaviors.”  (Handelman, 2008).  This behavior is sometimes found in dogs that are housed in shelters, due to the high levels of stress that they’re under in those environments.   One of the primary roles of shelter staff and volunteers is to reduce the dogs’ overall stress and help them find ways to cope with life in a shelter Volunteering at a shelter – Handling and Socializing Dogs, Part One. | The Animal Nerd . 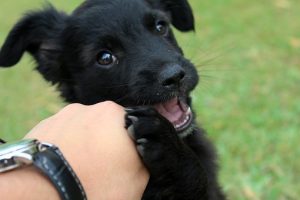 Mouthing during play is a normal puppy behavior. They learn bite inhibition during early socialization with littermates and humans.

Dogs use their mouths to play and to grab, hold and carry things.  It is a completely natural behavior that is part of their normal daily life.  And dogs generally exercise exquisite control over the speed and force with which they use their mouths.  This control, generally termed “bite inhibition” is learned during early socialization, primarily from their dams and littermates; and behaviorists encourage owners to continue this learning when they bring puppies into their homes (Dunbar, 2003).   Not all dogs learn this inhibition during the critical early socialization phases, however it can be trained later in life.  This important subject will be addressed in a later article.  The immediate problem we’re addressing here is how to deal with a dog who is prone to becoming so excited that his arousal level overcomes his training and bite inhibition.  I should point out that this is not aggressive behavior – it is simply a reaction to an overwhelming level of arousal.  But it can easily escalate due to frustration and responses to the handler’s reactions, leading to injuries.

This was the case with Aggie.   During the first few sessions I had with her, I simply observed her behaviors and interactions, and learned a few things:  First, she was very social and affectionate with her handlers.  Second, she was highly stressed (This is normal for shelter dogs.  No matter how much enrichment and positive experiences that a shelter provides, simply being in the shelter is a stressful situation for any dog.) Third, she didn’t have the normal ability to shed stress and didn’t engage in the usual self-soothing behaviors that most dogs have in their repertoire.  Lastly, she “trigger stacks”.  Trigger Stacking is a phenomenon that occurs when reactive dogs are exposed to multiple events that trigger excitement at the same time, or in succession, so that their excitement level ramps up to the point that they reach threshold that causes a behavior to occur.  In her case, when handlers came into her run, she gave them an excited greeting which the handlers responded to and inadvertently encouraged.  They then tried to get control of her in order to harness her for walking by giving her high-value treats.  The presence of the treats and the prospect of going for a walk further added to her excitement level, sending her over her arousal threshold and causing her to lose her inhibition against grabbing and biting.  This level of excitement carried over into her walk outside, to the point that any new stimulus caused aroused biting.

The first treatment that I put in place was to change her handlers’ behavior.  The goal was to make being harnessed, leashed and taken out of her run a normal and routine part of her day.  So, I eliminated the use of all treats in her run and instituted a friendly and low-key attitude for handling her.  At the first sign of arousal biting, handlers were told to leave her run for a timeout and avoid all other forms of correction.  I also adopted a Differential Reinforcement of Incompatible Behavior protocol, giving her a “sit” command during harnessing and leashing.  These served to keep her excitement level below threshold during leashing.  After a couple of days, she was much calmer during handling insider her run and would simply approach handlers for pets and affection rather than jumping and biting, then sit as soon as she saw the leash and harness.  She was visibly excited, but she was making good decisions and controlling herself.  However, as soon as she was taken out of the shelter building for a walk, her excitement level would ramp up to “11” and she would lose all bite inhibitions and would stop responding to any commands or prompts.  Virtually and sight or sound would send her over her behavioral threshold, and she would attack handlers’ shoes, clothing, hands and arms.  This was part of her trigger stacking: although she was handling the excitement of being harnessed and leashed, she was still in a highly stressed and aroused state and was unable to deal with additional stimuli.

I experimented with giving her an alternative outlet for her biting impulse.  As soon as I took her out of the run, before going outside the building, I showed her a huge rope chew (double rope, 30 inches long).  She immediately adopted it as her favorite thing in the world and began treating it as a tug toy as soon as we went outside.  For the next half-hour, she initiated tug-o-war games and carried the rope toy throughout our walk.  Whenever she made a move towards my shoes or pants cuff, I gave her a light audible correction and reintroduced the approved toy.  After two of these interventions, I saw her look at my shoe, then decide to grab the toy instead.  After a while, her excitement level dropped, and she began dropping the toy to sniff interesting things; and I noticed stress-relieving behaviors on her part (yawns, body shakes, etc).  After a while we stopped for a rest on a bench, upon which she jumped up alongside me, put her head in my lap, sighed deeply and relaxed.  Later in the day, I was able to use the toy as part of training the “drop it” prompt.  Other trainers began using novel tug toys with her and reported similar results.  And, in a few days, her biting impulse in general was much reduced.  By having an approved alternative outlet for her excitement, she was able to regain some self-control; and by having an outlet that did not provide any feedback from being bitten, it became a less desirable behavior.

The second dog, “Anna” was a different, and easier, case.   Anna is a medium-sized Labrador mix (AKA, American black dog).  Like Aggie, she was friendly with shelter staff and volunteers but was difficult to handle due to her constant state of stress-related excitement.  When she was in an aroused state, she was very reactive.  She would respond to the slightest touch by whipping her head around to the hand that was touching her, sometimes making contact with her teeth.  Unlike Aggie, she retained better bite inhibition and didn’t attempt to grab and hold her handlers’ arms or hands, but her behavior was escalating.  While observing her I noted that she is a very food-motivated, almost to the point of becoming fixated on any food that is in her vicinity. I also found that the shelter staff and volunteers were using food as a bribe while harnessing and leashing her for an outside walk, which increased her stimulation and excitement level – making her even more reactive.  I also saw that she had a similarly strong fixation on squeaky toys.   She would ignore durable chew toys or tugging ropes, or any other toy that did not provide an audible squeak when she bit down on it.  Her fixation on these toys did not reach the level of resource guarding to the point that she would show any signs of aggression but, once given a toy, she would actively keep anyone from taking it away.   It became we were dealing with a dog that had near-obsessions with food and with particular kinds of toys, and who became excited and reactive when she had them.

The first thing I did was to eliminate the use of any treats while she was in her run.  I wanted her to become accustomed to be leashed and handled without associating people with food treats.  In fact, I withheld all treats except to use as reinforcers when she was being trained on a new skill and kept training sessions very short.  She was so food-motivated that she would learn new skills very quickly, and by keeping the sessions short we could keep her excitement level down to a manageable level.

I then began walking her to quiet areas of the shelter grounds and sat down with her before giving her a a durable squeaky toy.  She immediately grabbed the toy and began mouthing it, while I engaged in touching and petting her.  At first, each time I touched her she would redirect towards my hand before returning her attention to the toy.  But after a while she began to relax and accept touching.  And, without any other exciting stimuli in the area (other toys, dogs, people), she began to self-sooth and seek contact with me.  Over the next several sessions, she became much easier to handle in her run and she continued to shed stress during walks.  She continues to be fixated on food and squeaky toys.  But, by incorporating these traits into her training regimen we’ve been able to modify her obnoxious behaviors and help to reduce her reactivity.

Aggie has since been adopted and her new owners are telling us that they’re thrilled to have her in their home.  Anna is in the process of being adopted and the shelter is encouraging her new family to continue training and socialization.

Additional information on dealing with dogs with excited biting and mouthiness can be found here:
How to Survive Your Dog’s Arousal Biting – Whole Dog Journal (whole-dog-journal.com)
Managing mouthing in dogs | Animal Humane Society