One of the most enduring myths about our pets is that housecats need to be allowed to roam free in our neighborhoods.  The fact is, they don’t.  In fact, being let outdoors will shorten their lives, along with those of a lot of other animals.

Studies of the life expectancy of roaming cats vary, with some claiming that their life expectancy is as low as two to five years (Watson, nd; Loyd et al, 2013a), however this is complicated by the difficulty that researchers have in distinguishing between feral cats, strays and pets that are allowed to roam outside the house.  But all of these cats face the same dangers and threats to their health and lives.

The leading cause of death for roaming cats is by automobiles (Tan, Stellato & Niel, 2020).  Lesser, but still serious risks are becoming trapped or lost, drinking dangerous substances, being poisoned, fighting with other cats or wildlife, or being preyed upon by wild predators, such as foxes, coyotes or raptors (Loyd et al, 2013a).  They are also at high risk for exposure to diseases and parasites, many of which can be passed to their human families, such as tularemia, rabies, ringworm and other human-transmissible pathogens or parasites (Gerhold & Jessup, 2012).  One of the greatest threats to human health from free-roaming cats is toxoplasmosis, an intestinal microorganism that can spread throughout households from an infected cat (Aguirre, et al, 2019).  All of these factors represent serious threats to their health and well-being and significantly shortens the life expectancy of any cats that are allowed to freely roam their neighborhoods.

And there is also the damage they inflict on other animals.  Unlike dogs, cats have been domesticated for only a few thousand years and have retained their predatory instincts to a much greater extent.  When allowed to roam, they’ll establish a range of up to 1,500 meters from their homes and spend much of their time hunting (Nicholas, 2019).   And they are efficient killers of the birds and small animals that make up the ecosystem we live in.  A 2012 study showed 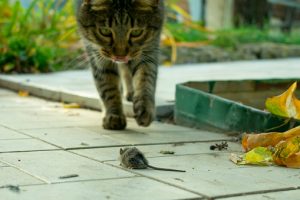 Cats retain their predatory instincts and will stalk and kill small animals regardless of how well they are fed at home.

that cats will actively engage in hunting small prey regardless of how well fed they are at home (Kitts-Morgan, Parsons & Hilburn, 2014) and, on average, will kill two prey animals per week (Loyd et al, 2013b).  A 2016 study of animals admitted to a Virginia wildlife hospital showed that cat attacks were the second leading cause of small birds and animals being treated (Mcruer, Gray, Horne & Clark, 2016).

The bottom line is that allowing your cats to roam not only endangers them and shortens their lives significantly, it places you and your family at risk for diseases and parasites.  They also prey on small birds and animals, and represent a risk to the ecosystems in our towns and neighborhoods.  There is no good reason to allow them out of the house, and every reason to keep them indoors.

Watson, S. (nd) Should You Have an Indoor Cat or an Outdoor Cat?  WebMD.  Retrieved from Indoor Vs. Outdoor Cats: Health and Safety (webmd.com)