I’ve been working with a pit mix named Sonny who likes to use his mouth too much.  He’s a large young mail dog, who was intact when he was transported in from another shelter.  He’s a handsome boy, with a cinnamon-colored coat and a big head, with a few scars on it – apparently bite marks from other dogs.  When he arrived, the shelter staff and volunteers noted that he had a habit of putting his mouth around peoples’ hands and arms and gently holding them without applying pressure.  A lot of people considered this to be endearing and a sign of affection.

However, in recent weeks, this behavior has escalated.  Now, when people enter Sonny’s run, he actively grabs at their hands and clothes.  No one has been bitten yet, but he is progressively applying more bite pressure and, the fact is, he has a mouth like a hippo.  I am a big guy, and he can wrap his mouth completely around my forearm.   In recent visits with him, I found that he becomes very excited and mouthy when I take him out of his run, to the point that it is very difficult to harness him and attach the leash – he grabs any hand that comes near him.  Naturally, this is an impediment to getting him adopted – and he is an otherwise friendly and gentle boy.

I theorized that there are two factors contributing to this behavior:  First off, the shelter personnel are bribing him with treats whenever he gets grabby, just to do their essential care-taking jobs of cleaning, feeding and socializing him.  This has the effect of reinforcing his mouthiness.  Secondly, he becomes very excited when being handled, and responds to that with him mouth.  I also noticed that he ramps up his excitement level very quickly in response to minimum stimulus.  His grabbing behavior can be triggered simply by a human handler reaching out towards him.  So, he has a pre-existing tendency to use his mouth when interacting with humans which has been reinforced by shelter personnel rewarding that behavior.  This problem behavior becomes more pronounced when he is in a state of excitement.

Although we try to make the shelter as positive and pleasant as possible for our animals, it is still a very stressful place to be a dog.  They are bombarded by unfamiliar sounds, scents, excited dogs, strange humans who stand and stare at them, and a constant stream of other stimuli that keep them on edge.  Sonny is no exception.  He seems to be in a constant state of tension and arousal, which puts him over his behavioral threshold whenever he is being visited or handled by shelter staff – and which seems to be eroding his bite inhibition.

In an earlier post, I discussed Aggie, another pit-mix with a mouthiness problem.  We addressed her issue by providing her with safe objects to grab and mouth, with no human interaction – thereby removing the reinforcement of that behavior.  After just a few days, the problem behavior lessened dramatically Excited Biting / Arousal Biting | The Animal Nerd.  In Sonny’s case, this treatment wasn’t an option.  He wasn’t seeking an outlet for stress, he was seeking human contact by an inappropriate means – his mouth.  Sonny was attempting to reach out and touch people, but his over-excited state was getting in the way.  He had no inclination to grab anything but people.

I tried a two-fold approach with Sonny:  First, I instituted a tug-o-war game to his exercise.  I got him a stiff, knotted rope toy, and enticed him to grab and hold it, while I tugged on the other end.  He caught on quickly and began playing.  I began offering him the tug toy and playing with him when first entering his run and harnessing him up. 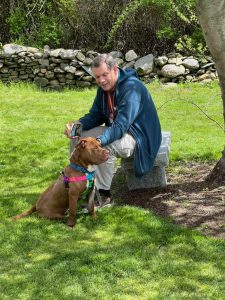 He was content to calmly watch other dogs and people.

I also added a gentle voice correction and a negative reinforcement when he tried to grab my hands.  I responded to his attempts with a sharp “Eh!”, stopped interacting with him and put my hands behind my back.  If he persisted, I would stand, cross my arms and turn my back for a few moments.  This, coupled with offering him an alternative (the tug toy) allowed me to put on his harness and leash.  (Note:  In general, I do not encourage people to correct shelter dogs’ problem behaviors.  Not only can this have the wrong effect on fearful dogs, it can also add to the overall stress they feel just by being in a shelter.   However, after getting to know Sonny, I felt that he was not fearful of people and would accept a correction, if it was followed with positive reinforcement of the appropriate behavior – in this case, redirecting to a tug toy.)

Secondly, I drastically reduced the excitement level of our time together.  Instead of taking him to a play area full of toys, I took him on a walk and let him set the pace and destinations.  I let him sniff anything that he wanted to, examine anything that was safe, and let him decide what was interesting to him.  Then I found a quiet, shady spot and sat down with a paperback book, keeping a good hold on his leash but otherwise ignoring him.

After a few minutes, I felt him lay down on my feet.  He was relaxed, soft-eyed, and simply taking in the sights, sounds and smells around us.  After a few minutes, I reached down and touched him on the side of his face, and his only reaction was to lean in for a pet.  After a while, other people and other dogs came into view, and his only reaction was to be interested in watching them.  When I brought him back to his run after an hour, he was calm and relaxed.  He became somewhat aroused and mouthy when I was removing his harness, however I attribute that to the treats that his handlers had been bribing him with during this process.   In the picture, there are several people and dogs out of frame, but he was maintaining a calm and interested demeanor, well within his ability to control his reactions.

All in all, I’m pretty sure that Sonny doesn’t need any formal desensitization to reduce his biting behavior.  Instead, he needs to have his overall stress level reduced and have calmer interactions with people.   Coupled with differential reinforcement – in this case, encouraging him to interact with people by playing tug with an approved toy, we should be able to reduce his problematic mouthiness.  I recommended that his handlers reduce the number of treats offered while handling him, reduce his playtime for a while, and concentrate on quiet walks and quiet sessions outdoors.    We need to help him find his “off switch” so that he can calmly interact with potential adopters and cope with the stressors he encounters.