In as recent post, I described my initial contact with a new shelter dog that had been displaying significant anxiety with people. My New Project Dog | The Animal Nerd After a few days, I’ve made some progress with Jack and, as he began reacting more “normally”, I’ve noted some behavioral characteristics that had not been apparent before:

First, he is very reactive to other dogs.  Our runs are glass-fronted, and whenever another dog is walked past his “space”, he charges up to the glass and barks very excitedly.  (He has a wide range of vocalizations, but his rapid “Stay Away” barks are particularly shrill.  Mariah Carey wishes that she could his high notes like this little guy can.)  However, he does not completely lose control when reacting to dogs and does not redirect his excitement to people or objects.  I suspect that a good part of his reactivity may be due to barrier frustration and that we may be able to socialize him with at least some other dogs.

Second, he is definitely more comfortable with women than with men.  He readily approaches women and invites contact with them.  However, once contact is made, he exhibits appeasing signals, such as rolling over, having a low posture, and submissive grinning.  He is making headway with meeting new humans but has a long way to go before he feels confident with us.

I’ve noticed that he tends to urinate in the center of his fabric bed, which leads me to think that he had previously been housetrained using pee pads.  This is just something to note for his eventual owners, as they may need to restart housetraining from scratch, depending on their desires. 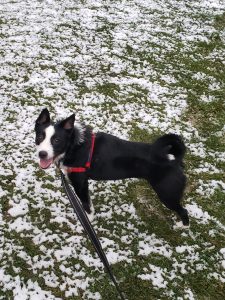 He has accepted additional handling and is visibly more relaxed.

As I mentioned, I have made progress with the little guy.  In a recent session, I was able to increase the level of physical contact that he’d allow.  This included increasing the area that he’d permit scratching and petting, as well as calming rubs and massages.  He became more inclined to lean into pets and ear-scratches and allow me to touch him with two hands.  He still maintained a “personal space” with me, however it became much smaller than previously.

Most recently, I was able to put an Easy-walk harness on him and take him outside for a walk.  He accepted the harness and leash easily and, once he got past his initial excitement, walked well.  This was an important development, as he began to “check in” with me while walking – looking at me for social referencing and direction.  He was also visibly relaxed and became more responsive to verbal cues from me.  I had to be careful with my posture and actions – for example, he became apprehensive when I bent over him to untangle the leash from his front legs – but he was overall much more confident.   I think this is something of a breakthrough that needs to be repeated and reinforced.

My treatment plan is developing to increase the level of contact with him and to have more men involved with his daily activities, to include feeding and handling, and gradually increasing their contact with him.  He has become available for adoption, and I will recommend in-home support post-adoption.