Continued from Penny, a story of counterconditioning | The Animal Nerd

So, with progress made on her overly active greetings, which were affecting the number of shelter volunteers who were allowed to, or willing to, work with her; and with her anxiety at being outdoors reduced to the point that it was no longer apparent, it was time to start work on getting her to tolerate indoor spaces.

I continued taking her to explore outdoor areas and relaxing with her in shady shots where she could watch the comings and goings at the shelter.  And I started experimenting with her behavior indoors.  It soon became apparent that she:  A. Refused to go through any doors except those that were in a direct path the outdoors; B.  Refused to go through any interior corridors; and C. Wouldn’t walk on shiny floors.  She didn’t panic when asked to go to any of these places.  She simply froze in place and refused to move.

All of which would seriously get in the way of getting her adopted.  On the plus side, she was very food motivated, and loves people and other dogs.  So, this gave me something to work with.

In order to get her to tolerate shiny surfaces and being inside a building, I first had to get her to accept going through doors.  I picked an entrance to the shelter that was in a fairly quiet spot and didn’t get a lot of foot traffic, but was near a section of occupied kennels (providing a scent-rich environment).  After she had a nice walk and some down time, I walked her up to the entrance whereupon she balked and froze as soon as the door opened.

Fortunately, I was prepared.  I kept her on leash, propped open the door, sat down and broke out my weapons:  small pieces of sliced of hot dogs, string cheese and the stinkiest training treats that I could buy in my local warehouse store.  I tossed an assortment of them on the ground immediately outside the door and, after some hesitation, she vacuumed them up and got praised.  I repeated this several times, each time tossing the treats closer to the door threshold and praising her every time she stepped closer.  Each time she advanced; I took up some of the slack in the leash without pulling her.  This prevented her from retreating to square one, but also allowed her to establish a new comfort zone.  It also precluded any oppositional pulling.

After several iterations during the following week, I was able to toss the treats inside the door while she stretched inside to get them; then, as I put the treats further inside, she began putting her front paws across the threshold.  And she eventually stepped all the way inside.  Once she was far enough in, I gently closed the door and kept praising her while giving her a good scratch.  That was enough for the first day.  She had earned a good cool down in her run. 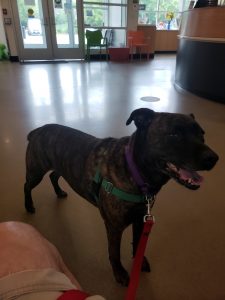 On the next session, she balked at the door again, but overcame her fear more quickly and with fewer treats.  By the third session, it took half as much time and reinforcement to get her inside.  After that, I was able to get her to stay in the interior corridor without asking to leave, while getting scratches, pets and treats.   I then enlisted some volunteers to join us in the corridor, and she relaxed enough to walk up to each of them and ask for pets.  During the next session we moved further down the corridor and, she willingly entered the main lobby on the following day.

This was the big breakthrough.  After getting her used to being in the lobby of the shelter, I was very quickly able to get her to visit all the public areas in the shelter, and she began to enjoy being around her human friends (e.g., everybody she met).   She willingly used all the building entrances and the shelter lobby became her favorite place.  She was getting very popular with the staff and volunteers, and had lots of positive interaction.

She was still occasionally snapping at the stump of her tail occasionally.  Often when food was provided or she became excited.  I began responding to this by giving her scratches on her butt and  hips whenever she did this.  She initially reacted to my doing this, but after a few repetitions, she began to accept this as a pleasant stimulus and relaxed and leaned into me while I was doing it.  I enlisted other handlers and volunteers to do the same thing, and her self-harming reduced over the next several days as she accepted that activity along  her flanks hindquarters was a good thing.

At this point, we had reduced her fear of being outside her run, had reduced her tendency to self-harm, she was greeting her handlers in a calm and friendly manner and her tendency to self-harm was greatly reduced.  Our staff decided to place her in a foster home to continue her treatment and acclimate her to a home environment outside the shelter, and I felt that she was well on the way.

And that’s when the wheels came off the cart.