Our shelter staff found a very experienced foster family to take in Penny and help her acclimate to living in a house.  Two Fridays ago, they picked her up from the shelter and brought her to their home.

The following afternoon, I arrived at the shelter and found Penny back in her run, very happy to see me.  It turns out that Penny had two additional issues that we had not known about:  She was afraid of cars and she refused to use stairs.  The first issue came up as the shelter staff helped her get into the foster family’s car.  The second issue came up when they got to their home, which happens to be a second-floor walkup apartment.  I should note that, for all her anxiety and self-harming tendencies, Penny is a remarkably gentle dog.  When she objects to doing something, she simply freezes in place.

So.  Two steps forward and one step back.  Now we have to add cars and stairs to the list of things that Penny needs to become habituated to using.   I tried the usual methods of getting her to use the shelter staircase, first by luring her with high value treats and later asking her to follow another friendly dog up them.  I was able to get her to go up four steps and she finally put her hind feet on the bottom step, but that was as far as I could get; she would become overly anxious and shut down.  And using this particular staircase became a non-starter when she caught on to the fact that the cats and small animals were housed near the stairs.  There’s no way that treats were going to distract her from those. 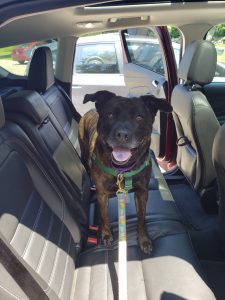 Once she began to associate cars with pleasant experiences, she decided that they weren’t so bad.

So I decided to use a different approach to conquering her fear of stairs by getting her to use outdoor stairs in open areas.  Unfortunately, large as our shelter grounds are, there are no stairs outside the building.  We figured that a nearby middle school, which had wide outside steps, would be perfect for this effort; but that would mean getting her in a car.  And we knew that Penny would have to become habituated to using multiple cars and generalize being in them.  So, several of us began an effort to make cars fun and desirable by a combination of high value treats and pleasant experiences in them.  We got her to follow us into cars and then took her on field trips to fun and interesting places, with lots of things to sniff.  Within a few days, she was jumping into cars with minimal encouragement.

Then I started taking her to the middle school and using the stairs.  On the first visit, a couple of days ago, she went up and down a low set of outside steps (four steps) but balked at using a larger one.   We’re continuing to work on that.

We have more work to do with Penny, but she’s come along far enough that the shelter staff believe that she can be adopted out to a family that’s willing to work with her post-adoption.   In the meantime, I’ll keep working with her on her few remaining issues.

First, do not rush.  Get the dog to accept and trust you before attempting to modify her behavior.  If, as far as she is concerned, you’re just a treat bag with an arm, you won’t get results that will transfer to an adoptive family and home.

Second, get the dog familiarized and comfortable in environment in which the behavior modification treatment is taking place.  If she is stressed by being in a new location, you’re not going to get anywhere.  Depending on the dog, this may take several visits.

Third, do not forget the basics.  Penny’s treatment was complicated by the fact that the only skill in her repertoire was “sit”.  This is a great help in leashing her up, but not good for much else.  When you’re trying to get a dog to overcome a fear of performing a certain action, there is no substitute for having a good, solid recall.