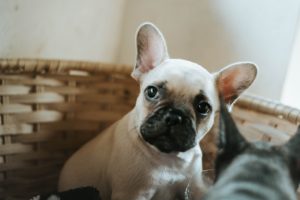 Dog Theft:  Is it really on the rise?

Like everyone else who watches the news, I was shocked by the recent assault on Lady Gaga’s dog walker and the theft of her French Bulldogs.  I was heartened by their quick return (Lady Gaga’s two French bulldogs have been returned safely, LAPD says – CNN), and more so by the fact that her dogwalker is getting the best of care and seems to be out of danger.

In light of all the press coverage, I had to wonder how prevalent dog theft really is, and how the pandemic is affecting the frequency of pet theft in the United States.  There is a great deal of information on the seriousness of dog theft in the United Kingdom; the reporting of pet thefts has increased over one hundred percent in 2020.  This is due to several factors:  The stringent pandemic lockdowns in the UK have created an increased demand for puppies and dogs as Covid companions; while the lockdowns and European travel restrictions have created a shortage of purebred dogs for purchase or adoption (Huge increase in UK dog theft blamed on COVID-19 restrictions | Euronews).  This has resulted in an increased demand and a sort of black market for desirable dog breeds.  There is little doubt that the rate of dog theft is drastically increasing (Puppy shortage amid COVID leads to uptick in animal thefts (radio.com)).

With regard to the United States, it turns out that it is hard to determine whether the pandemic is resulting in an increase in dognapping.  There simply isn’t a lot of available data on this subject.  Most states do not have dedicated statutes for pet thefts – these are considered to be crimes against personal property.  Only fifteen states have specific criminal codes regarding dog theft.   I have seen some reporting that dog thefts in the United States has increased substantially, but haven’t been able to locate any actual figures to support those claims.  Many of the claims are anecdotal and, frankly, the media accounts are generally written to maximize their emotional impact.  Also, since the AKC’s statistics have been derived from media reporting, this has the potential of being a self-licking ice cream cone:  As public interest in dog theft increases, media outlets are more inclined to cover these thefts which, in turn, increases the number of thefts that appear in media-derived statistics.

Here’s what we do know:

Small breeds are very vulnerable to theft, simply because they are easy to snatch and hide (ref).

Stylish breeds, such as French bulldogs, are targeted by thieves because of their size and popularity.  They are easy to sell.

Small, pure-bred dogs are generally stolen by dog-flippers, who sell them for profit, or by people who simply want one for themselves (Dognapping: How to Keep Your Dog Safe When Pet Theft Is on the Rise (akc.org)).

Only about ten percent of stolen dogs are recovered and returned to their owners (The Alarming State Of Stolen Dog Laws & How To Prevent – CanineJournal.com ).

The number of thefts has been steadily increasing in recent years, so it is reasonable to assume that we have had a significant increase in the number of thefts in 2020.  Although our lockdowns have not been as widespread and draconian as in the UK; there has been a definite increase in the demand for small companion animals (ref) and breeders and rescues have had difficulties in transporting dogs.

And the fact is, from the standpoint of the criminals, dog theft is a relatively low-risk crime.  Even in states with criminal statutes regarding dog theft, they are generally considered misdemeanors with minor penalties.  Also, without compelling evidence such as high-quality video recording of the theft, these crimes are hard to prove.  A thief can simply say that he found the dog wandering on the street (The Alarming State Of Stolen Dog Laws & How To Prevent – CanineJournal.com ).

So, if you have a puppy or a dog that happens to be a popular breed, what can you do?

First off:  Microchip your dog. Although this may not prevent your dog from being stolen, it greatly increases your ability to positively identify him or her.

Third:  Be conscious of your surroundings while walking your dog.  Make sure that you are aware of cars that are driving too slowly, or that you see more than once.  Be aware of who is walking behind you.  Carry a whistle or other kind of alarm.

Lastly:  Be aware of your dog’s social media presence.  Do you really need to show him off to the entire internet?  You do not know who is looking for available dogs in your neighborhood.