Now that I’ve finished working with Jack Final Update on Jack | The Animal Nerd, I’ve begun handling a new dog at the shelter.  Toby is a large, handsome, one-eyed (his injured eye was recently removed) mixed breed with a number of behavioral issues that need to be addressed. 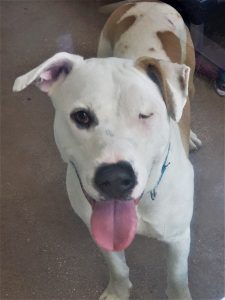 Prior to my meeting him, all I knew about him was that he had shown a distinct tendency to grab and bite his leash, and that he was inclined to treat handlers’ clothing as a tug toy.  So when I started working with him, I took him outside for quiet walks (no excitement or play) with an appropriate tug toy for him to grab and carry.  I limited the time that I held onto the tug, or that I engaged in play with it, to control his excitement level.  He began each session acting like a tornado, almost impossible to harness, pulling on the leash and grabbing at me, but the treatment worked and he calmed down after a while.

When he calmed down and we sat for a while, I noted that he was actually very insecure.   When we found a bench in a quiet area, he sat with his back to me and pressed up against my leg for security, while watching everything that went on around him.  He was showing signs of being a little apprehensive, but had it under control. 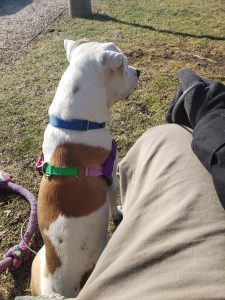 He began sitting with his back to me, pressed against my leg for security.

It became clear that his problem behaviors were not “learned” but was a reaction to the stressors of being in the shelter, being handled by strangers and (probably) the changes in his vision.  It also became plain that he likes people and readily affiliates with new handlers.   This made his treatment very easy.  In our next session, upon entering his run I spent ten minutes just being quiet, friendly and positive with him, kneeling down close to his eye line; when he began to ramp up, I added calm pets and body rubs, then quietly worked on straightening out his twisted Freedom Harness.  By the time I was done, he was sitting quietly, ready to go.  His walk went much more smoothly with no leash biting or grabbing, and he interacted with me in a normal way.

Volunteers and handlers have reported that he is doing much better with this approach and is becoming more relaxed in general.  I think this is a positive outcome and that he’s ready for adoption.