You probably already know what trigger stacking is.  If you’ve ever seen a small child have a melt-down at an event or a party, or seen a co-worker go ballistic over a seemingly small incident, you’ve already seen and understood what it is.  Trigger stacking is the cumulative stress and excitement that results from a consecutive series of events[i].  It becomes a problem when that person’s accumulated stress reaches a level at which he is overloaded and goes ballistic.

The same thing happens with dogs.  Like us, they encounter a certain amount of stress in the course of their day and probably get excited about a few things, and their level of general arousal builds. Then, probably at the most inconvenient time, they encounter that “one last straw”, their excitement level exceeds their behavioral threshold, and they lose all self-control.  This doesn’t have to be the result of adverse or negative experiences; their overall arousal level can just as likely result from a series of very positive experiences. This has been touched on in previous posts on problem behaviors (Excited Biting / Arousal Biting | The Animal Nerd  ), and their causes.

For example, I worked with a shelter dog recently who had a very difficult time with triggers getting stacked. “Cal” is a people-friendly pit mix who had a tendency to become over-excited when being handled by volunteers or staff.  When he became so aroused that he went over his behavioral threshold he would start frantically trying to grab and tug anything that the volunteer was wearing, including shoelaces, pants cuffs, gloves, sleeves, hoodie drawstrings, etc.   Simply standing up and not responding didn’t work, as he would keep grabbing anything on the handler was wearing.  Walking him was not possible, as he would continually grab for the leash or his handler.  I should note that there was nothing aggressive or fearful in his behavior, he was just excited past his ability to interact with this handler and listen to commands.  However, there was legitimate concern that this tendency to go over the top would result in him losing his bite inhibition.  And, even if it didn’t escalate further, this over-excited behavior was a potential hindrance to getting him adopted.

So, why was this happening to a friendly and playful dog?  Consider his environment:  He was in a shelter – an environment filled with unfamilia

r and stressed-out dogs, unfamiliar smells and sounds, strange people, etc.  Strange humans would approach him and stare at him from outside the door and windows of his run.  Often, when the shelter staff entered his run, it was to give him food.  And handlers would often give him treats to occupy him while he was being harnessed and leashed up.  So, he was constantly in a stressed and excited state; when a handler entered his run to take him for a walk or play session, that would be the final trigger that sent him over his behavioral threshold.  So, what to do? 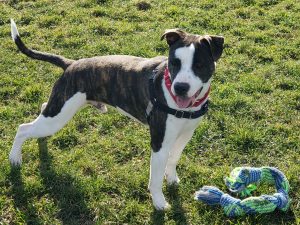 Cal and his therapy tug toy.  By giving him an approved outlet, he could control his mouthy impulses.

First, I recognized that I couldn’t do much about his baseline stress level from simply being in a shelter environment.  So, I concentrated on reducing the stimuli that accompanied being taken out of his run.  I began by making sure that I had his harness ready to go before I even started, so that I wouldn’t be fiddling with it while in the run with him.  Upon entering the run, I didn’t face him directly or remain standing – I turned sideways and knelt down.  I gave him a durable tug toy to mouth and shake – satisfying his grabbing impulse and giving him an appropriate alternative to a handler’s clothing.  Lastly, throughout this interaction I moved slowly and I did not use any treats or use excited “baby talk”.  I petted him on his sides, chest and under his chin, and spoke to him in a calm and friendly tone.  By doing all this, I was able to help him manage his excitement level:  He accepted the tug toy and acted in a friendly and excited manner – accepting pets and signaling that he wanted more contact.  He was still excited, and was practically vibrating like a guitar string, but he never went over his behavioral threshold.  Harnessing him and leashing him up was much easier and, by allowing him to carry the toy during a walk provided an outlet for his impulse to grab and tug.  After a while he began dropping the toy in order to investigate smells and relieve himself, then coming back and reclaiming it with decreasing excitement during the course of the walk.  When the shelter volunteers adopted this treatment, he was able to control himself while being handled.

Cal was just one example that illustrates how we can reduce the triggers that can accumulate and lead an already-excited dog to lose control of himself.

First:  Be mindful of the dog’s stress and excitement level.  Before any interaction with him, watch his body language for signs that he is stressed[ii].  Get an idea as to how much more excitement he can handle.

Second:  Check your own emotional state.  Are you calm, relaxed and operating in the moment, or are you focused on aggravations and frustrations that you’ve encountered during the day?  If so, you are contributing to his stress level.  Dogs use us for social referencing and will read your expressions and body language to determine your mood and respond to it[iii].  If you’re acting angry or stressed, he will be on edge as well.

Third:  There’s no hurry.  Take your time when you’re interacting with an excited dog.

Fourth:  Be mindful of your own body language.  Don’t engage in a staring contest, approach him directly or bend over him.  Stand, sit or kneel sideways to him at first without looking in his eyes.  Don’t reach over him when leashing or harnessing him.

Fourth:  Be mindful of his body language.  He will give you signals as to how you are making him feel.  If he starts giving calming signals such as yawning, lip-licking, etc., then stop what you’re doing.  You’re freaking him out.  Let him decide when to approach you[iv]

Fifth:  Don’t add any stimuli that aren’t necessary.  Don’t act excitedly, give treats or give commands that aren’t needed.   Don’t prompt him for behaviors that he has been given rewards for performing.  Just let him calm himself down.

Lastly:  Monitor his behavior the whole time that you’re working with him.  If you are walking him and he stops, freezes and focuses on a person or another dog, then calmly walk in front of him, block that distraction with your body and take him in another direction.  Make his time with your interesting and provide enrichment that let him bring down his excitement level.

Once he’s calm and relaxed, you can start adding toys and playtime, or engage in some training.  But sometimes, the best thing you can for a dog is to just relax with him and help him to bring down his stress level[v].