Last month I was asked to take on another “project dog”.  That’s how I met Winston. 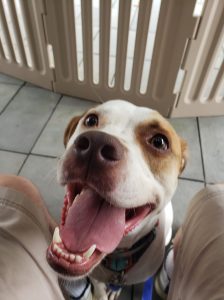 He had been returned to the shelter after his adoptive owner experienced problems with him.  Winston had gradually become emotionally dependent on her to the point that he guarded her as a resource and was being aggressive with any visitors to the house.  He was also displaying high levels of anxiety about noises outside the house and was becoming extremely reactive to them.  The owner eventually decided that she couldn’t handle his issues and brought him back.

When I first met him through the glass door to his run, he was extremely reactive.  He was baring his teeth, giving low growls and short, staccato “warning” barks.  I followed my usual initial practice of sitting down on the floor outside his run, facing away at an angle and reading my messages and Facebook feed, while occasionally putting a treat in the run (There are “treat holes” in the glass fronts to the dog runs.  These encourage the dogs to approach visitors and potential adopters.)  I repeated this three times on the first day.

The second day, he was quieter when I approached his run, but still visibly nervous.  This changed when he saw that I was unlocking the run, at which he visibly relaxed. He had come to associate this motion on my part with food and potty breaks, and he was visibly happier and more relaxed.  I was able to leash him up very easily and took him outside.  That’s when I was able to get a good look at him and his behavior.

The shelter has a large, very pleasant, outdoor area that includes a large field, a large, enclosed play area and the grounds have shaded areas with benches.  I took Winston on a walk around the entire grounds so that he could have a few good sniffs and relieve himself, then just sat with him on a bench that had a view of the building entrance, to see what he did while people came and went.  I saw that he became alert whenever anyone came into view, but that he didn’t engage in any self-soothing behavior during quiet times.  I also saw that his level of tension was ramping up, and that he was beginning to seek physical contact with me.  I took him around the building to a quiet area in the back of the building, near a wooded area, and he was still unable to relax.  He began to increase his contact-seeking behavior, putting his head and paw on my knee and pressing himself against my leg.

All this inside of 30 -45 minutes (which is the maximum time that I spend with a dog during behavior modification treatment).   In two short sessions, he had gone from giving me teeth-baring distancing signs to extreme contact-seeking behavior.  At this point, I had a pretty good idea of his issues:  He was an extremely anxious dog who had trouble shedding stress and sought contact with a human handler as a means of feeling secure.  It’s very understandable how an owner could mistake this contact-seeking behavior for displays of attachment and affection and encourage it.   Its adorable, but its also the exact opposite of a healthy, relaxed behavior.

So, the job was to increase his confidence regarding people, help him to relax and engage in self-soothing, and help him to tolerate strangers in his space.