Keeping in mind the three objectives that we established, I began spending more time with Winston.

Over the next two sessions, Winston’s attachment to me became stronger, as did his social anxiety.  He was able to relax and play when no other people were around but, as soon as other people appeared, he would seek physical contact with me, often positioning himself so that I was between him and other people and avoided looking at them.  This was particularly the case in indoor settings, such as the shelter lobby.  I also noted that he was still not engaging in any self-soothing behavior and that his level of anxiety would slowly increase while in social settings.  On the plus side, the shelter staff has determined that he is well socialized with other dogs; he behaves appropriately and invites play upon meeting new dogs of varying ages and sizes. 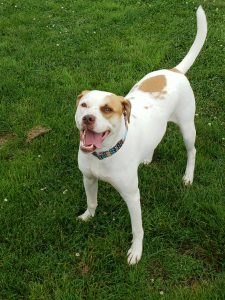 He was able to relax and play, and accept more human handlers.

I began by introducing play during both outdoor and indoor sessions.  He enjoyed retrieving tennis balls in our outdoor pen, so I would start the sessions there and let him play until he was in a relaxed state of mind.  Following that, we would have some quiet time, sitting with him and letting him watch the shelter grounds.  After two of these sessions, I found that he would relax during the quiet time and allow some distance between us.  He was also starting to show stress-shedding behaviors, such as yawning and body shakes.

He was also beginning to open up to some of the shelter staff and was showing attachment to them as well as to me.  So, after consulting with the shelter behavior team, I began recruiting experienced volunteers to handle him during walks and play, with the goal of giving him pleasant experiences with new people.  When introducing him to new human friends, we did this in the least stressful way possible, with me leashing him and taking him from his run then starting a walk with the new handler.  After a few minutes I would hand off the leash and accompany them to the play area.  At this point, I would stop reacting to him and have the new person engage in all play and displays of affection.  It never took more than one session for him to accept the new volunteer as a trusted friend.

In indoor settings, I began using the “find it” game (tossing high-value treats within the radius of his leash) whenever he began showing distress or started clinging to me when other people were around. This was successful in getting him to reduce his anxiety level and interact with his surroundings rather than avoid them.  I also encouraged his growing circle of human friends to engage with him when I had him on leash in the shelter lobby.   I continued to disengage from him when other handlers were present, and he has responded to that by engaging with them.  At present, he is able to lie down and relax on the cool lobby floor when new people are present.

Winston is getting close to being adoptable.  The shelter staff will attempt to place him with adopters who already have a well-socialized dog and are willing to commit to a continued management program in order to identify and address any guarding behaviors that may arise as he adjusts to being in a new environment.  From what I can see, his prognosis is good.